In Vienna and Prague, Sichuan tourism promotion activities, with panda elements and Sichuan cuisine as its theme, are more prevalent among local tourism personnel, the general public and the mainstream media, which sets off a wave of Sichuan tourism.

Panda and Sichuan cuisine swept Austria and the Czech Republic

At the Hilton Hotel in Vienna, when arranging the venue, people were attracted by giant panda dolls surprisingly. Many travelers who dine at the hotel have asked panda dolls from the staff as souvenirs. About 1:00 a.m. in the early morning, the hotel staff had been exhausted from venue arrangement, however, when accepting the giant panda doll from the marketing team members for gratitude, they immediately relived and said that the children will be pleasantly surprised.

On promotion day, various Sichuan tourism elements has created a distinctive atmosphere, such as the eye-catching panda LOGO on the hotel signs, hundreds of different panda dolls, Sichuan tourism resources exhibition, Sichuan tourism products promotion video, which gave the Austrian guests a new experience as if they were in Sichuan.

At the promotion, inspector Chen Jialin sent a warm invitation to Austrian tourism industry colleagues and travel enthusiasts in his speech. Many leaders attended the promotion activity, including Ding Yazhen, political counselor of the Chinese Embassy in Vienna, Sonia, director of the Tourism Bureau of Vienna, Xia Weiping, president of the European Association of Tourists, and other guests from Austrian tourism industry and media guests nearly 100 people.

Many Austrian travel agents listened to the Sichuan tourism product promotion, writing a serious record. After the promotion, the local travel agent representatives exchanged business cards and WeChat number with marketing team members, they are eager to communicate with each other, so that promotional activities outside the venue lasted for nearly an hour.

In Sichuan Restaurant of Vienna, inspector Chen Jialin awarded the „Best Sichuan Restaurant“ plaque to general manager, Zhao Xiaofeng. Josef Weissbacker, former executive chef of well-known Steirereck Restaurant in Austrian, cooked a Sichuan dish himself- pork lungs in chili sauce, under the guidance of the master of Sichuan cuisine. The dish was highly praised, so that he was very excited.

In the front of Sichuan Restaurant „Chuanwangfu“ next to Prague square, a group of people in panda dressings sent out the Sichuan tourism advertising materials and giant panda dolls, attracted passers-by to take a photo; the giant panda painting activity attracted a lot of children, who painted the panda with colorful pen. Thanks to their work, original black and white giant panda became very lovely. 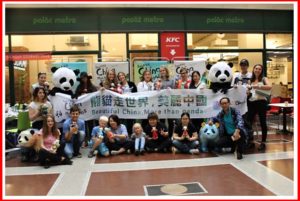 „Best Sichuan Restaurant“ was also awarded to „Chuanwangfu“ by Sichuan Provincial Tourism Development Committee. In the future, this restaurant will be the „forward position“ in advertising the Sichuan tourism in the Czech Republic and Austria, carrying some marketing work, as the Sichuan Restaurant in Vienna.

The marketing activities in Austria and Czech received attention from media at home and abroad, including European Times, Economic Daily in Austria, Huaxin News, The Austrian, The Courier. The marketing group also strengthened publicity through its own channels, thus the report about the promotion activities in Vienna was reprinted by more than 400 foreign media and Sichuan Tourism became hot in Europe.
The Cooperation of Government and Enterprises Produced Substantial Results 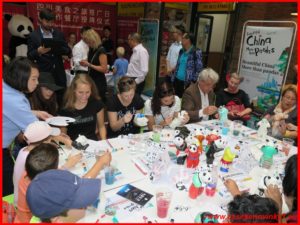 According to the agreements, the contracting parties will jointly promote further cooperation in tourism field, and promote the development of the tourism industry together, including more exploration of regional tourism development and cooperative potential and exchange of information to realize the sharing of tourism information. Chinese travel agencies put corresponding ads or launch corresponding promotional activities in Austrian market so as to provide conditions for its promotion. Austria promotes actively China’s tourists resources and products to Austrian people and constantly improves people’s awareness and recognition of China. Chinese enterprises will reward Austrian enterprises based on target incentives confirmed by both sides.

In addition to a series of cooperation agreements signed on the promotion, the marketing mission visited to Czech National Tourism Bureau, Czech Travel Agency Association and other agencies and communicated with AirChina Vienna Business Department and Sichuan Airlines Prague center and got a lot of information and achieved intents of cooperation during the marketing period.

At the meeting with Czech National Tourism Bureau, Monica Palatkova, director of the Bureau, expressed a warm welcome to the marketing mission. She said that since Chengdu opened direct flights to Prague in February last year, Chinese tourists had increased significantly and the market potential had become obvious. At the same time, Czech National Tourism Bureau was also very willing to cooperate with Sichuan to carry out marketing activities so that more and more Czech tourists would travel to Sichuan and CZE and China would achieve win-win results. Chen Jialin expressed his heartfelt thanks for the efforts made by CZE and hoped that all of us would move forward towards the same goal. He also invited Monica to attend the 4th Sichuan International Travel Expo in 2017. The two sides also conducted in-depth discussions on tourism product research and development, marketing, customer delivery, quality of service and training of minority-language guides.

Through visits and exchanges these days, the tourism enterprises in Sichuan also established new communication channels with the travel industry colleagues in Austria and CZE and achieved a series of cooperation intentions. For example, the delegates of Czech Travel Agency Association hoped the tourism enterprises in Sichuan to make travel plans instantly. They planned to lead a team of 300 people to visit Sichuan.

With the opening and increasing of direct flights, the contacts of Sichuan and Austria and CZE have become closer and more frequent. The potential of tourist source markets for each other is huge. The marketing promotion activities are believed to lay a solid foundation for tourism exchanges and cooperation between Sichuan and the two countries and to become an important driving force for Sichuan to further expand the inbound tourism market of Austria and CZE.